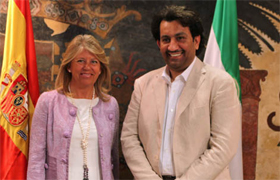 After many years of “will he or wont he”, it seems time has finally run out for Sheikh Abdullah Bin Nasser Al-Thani.

Back in 2011, the successful businessman presented a plan to reform Marbella’s Puerto de la Bajadilla. The plan proposed a total redevelopment with an 84 million euro investment.

The Sheikh, who also owns Málaga Football Club, presented plans which at the time were hailed as one of the “most important urban developments in Marbella’s history”.

The plans included a spectacular exterior dyke surrounding the whole area of the port. There was also a plan to increase the harbour’s capacity to accommodate over 1,000 vessels including cruise liners. A new commercial area and a five-star hotel were also included.

However, as time dragged on it seemed less and less likely that it would actually happen. The Sheikh continually missed payment deadlines, failed to present any concrete plans and failed to pay architects. The architects were Seguí, who consequently sued the Sheikh for 3.8 million euros for the work they had already done. This included the popular 3D renderings you may have seen.

Get On With It

The Sheikh received a final ultimatum in March this year. It stated that he was to begin development or face the cancellation of the entire project.

He  missed the final deadline and Marbella’s Port Authority (APPA) say they are looking for new investors.

The APPA state that they are in talks with multiple groups including investors from the UK and the Middle East with the aim of getting the project back on track.

As before, the APPA are presenting an optimistic outlook saying the project will create 3,000 jobs and be a major economic boost for the town.