Second-Hand House Prices Up in April 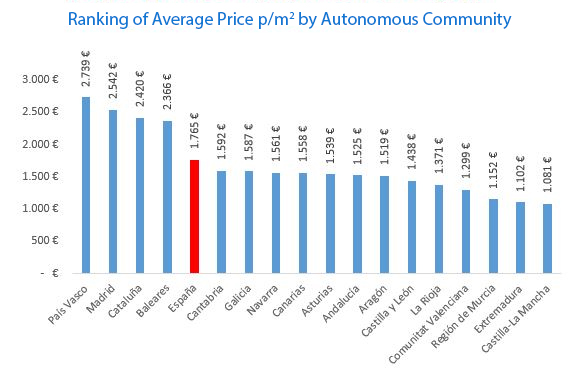 Second-hand house prices in Spain stood at an average of €1,765 p/m² in April, an increase of 0.7% when compared to March. This confirms that the price of second-hand housing is stable and is fluctuating only slightly month to month.

With respect to the annual variation, the price in April represented an increase of 5.4% when compared to the previous April. It also marks 19 consecutive year-on-year increases. Since the beginning of 2018, the interannual variation has been above 5% every month, according to the latest figures from fotocasa.

“The price increases are a reflection of the good times the sector is experiencing. The consolidation of mortgage financing has coincided with a more positive economic situation, and house hunters are showing renewed interest. But we must not forget that this recovery of the housing market will be slow and moderate and will not continue at the same pace in all communities,” said Beatriz Toribio, director of studies of fotocasa.

Second-hand house prices increased in 11 communities in April. The most significant increase was seen in the Balearic Islands where prices rose by 1.7%. Madrid, La Rioja and Catalonia all saw prices increase by 1.6%, while in the Canary Islands owners are asking 1.3% more than in March.

Of the total 775 municipalities of Spain, 370 saw the price of second-hand housing increase in the month of April. 20 municipalities saw prices remain stable and in 385 there were price falls.