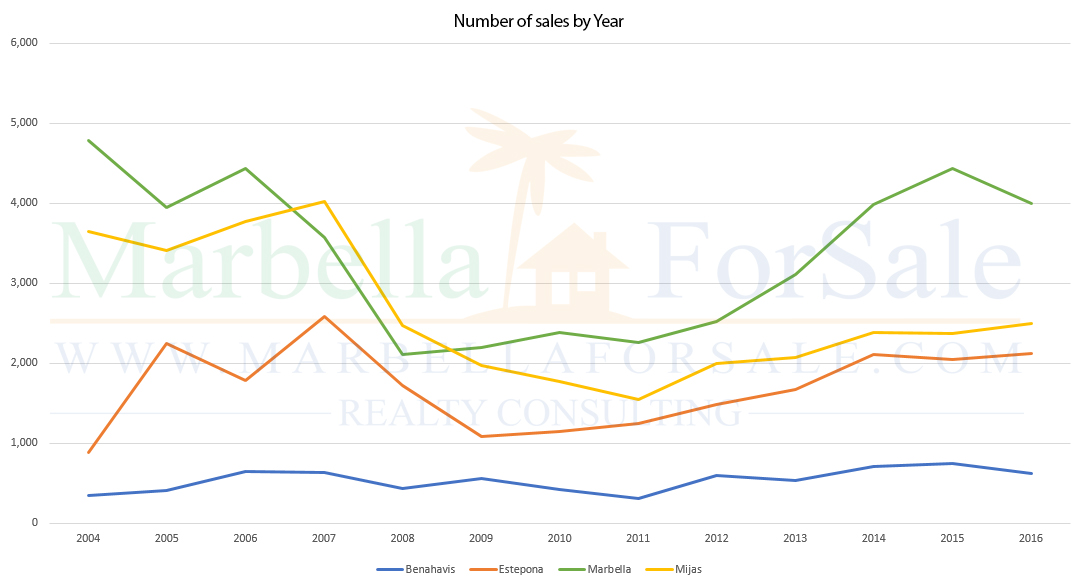 The final 2017 figures are in and they show that it was a great year for home sales in some areas and not so great for others.

This article follows on from one I wrote following the release of the Q1 figures, which you can find here.

Firstly, here are the home sales figures for our four main areas (Marbella, Benahavís, Mijas and Estepona) for 2017.

As you can see, only Benahavís saw a fall in sales in respect to the previous year. Estepona, meanwhile, had its best year even surpassing sales figures from before the crisis. Sales in Marbella appear to have levelled out. Although figures show an increase when compared to 2016, 2015 was busier. Pre-crisis 2004 still stands as the busiest year for the tourist hotspot. Mijas also saw a significant increase in home sales in 2017. With only a slight dip 2014 to 2015, Mijas has seen steadily increasing sales figures since 2011.

Incidentally, the total sales in 2017 (10,590) is only marginally below the highest figure (10,809) which was seen in 2007, arguably the year that saw the crisis take hold. That makes 2017 the third busiest year since 2004, in terms of home sales. You can see that since 2011, other than an almost insignificant dip between 2014/15, sales increased consistently along the coast. Both Benahavís and Estepona are now selling more properties annually than they were in 2004. Marbella and Mijas are also catching up.

The figures for Benahavís are not a surprise. There hasn’t been much construction going on in the town for some time, in part due to lack of space. That has significantly reduced supply in the area, which is reflected in the figures. However, there are a number of new projects currently underway in the mountain village which are on the market now. I would expect this to have a bearing on this year’s home sales figures.

Construction is alive and well up and down the coast and Estepona is no different. A lot of people think of Estepona as starting at the drive-thru McDonalds but it actually begins long before that, around Atalaya. Most of the New Golden Mile is officially part of Estepona. This means a lot of new developments although quite a distance from the town, are included in Estepona’s figures. Quite a few have sprung up in recent years with plenty more on the way. These have surely helped Estepona increase its sales. I would expect the likes of Flamingo Villas, Estepona Golf, Campanario Apartments, and many more new projects in the area to provide a much-needed boost to the towns figures for 2018.

Mijas is still showing figures below their pre-crisis peak but not so far away from 2004/2005 results. Following the peak in 2007, sales in Mijas fell dramatically year-on-year until they hit bottom in 2011. Since then, sales have increased slowly but steadily with 2017 bringing almost 3,000 sales, close to figures from 2005. Since 2011, sales have almost doubled in Mijas.

Typically the busiest town, Marbella has a long history of high property turnover. Once a new development is announced, it usually sells out very quickly due to the fame and reputation of the town. But as with other areas, construction stopped for many years following the crisis as out-of-pocket investors tightened their purse strings, and private buyers abandoned the holiday-home ship in droves! Sales figures have increased though, and 2017’s results show more than double the number of sales seen in the low of 2008. Despite a couple of small dips sales have continued upwards and this is reflected also in sales figures from the first quarter of this year.

Of course, sales are also influenced by price and we have seen increases for the last eight consecutive quarters, only dipping at the end of Q1 this year. Does this mean that the recovery is over? No. Higher prices and slowing sales are not something the market wants to see, but it is expected. Prices cannot keep rising forever, and although prices are still not at the highs we saw before the crisis they are getting there. I expect prices and sales figures to remain steady for the next 12 months, following years of increases.

Brexit is still having an affect on sales too. Many Brits who were previously in the market for a holiday home are now holding back. People are waiting for something concrete from their government who, to say the least, have provided only sketchy information concerning what rights the Brits will or will not have in the EU following their departure.

The Costa del Sol is back! It is once again an active market for developers, investors and private buyers. With the return of construction, there is plenty of stock of both used and new property on the market. Plenty of choice is good for buyers. Sales are up, and the coast is busy with buyers looking for their dream home in the sun. Start your property search today!