Over 10 Million Tourists in August 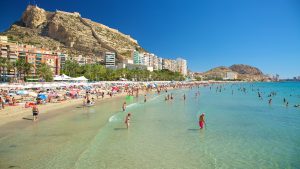 As expected, August was another record month for tourists with Spain receiving 10.1 million international visitors. This represents a 5.8% increase over the same month in 2015, according to the official data from the National Statistics Institute.

Visitors from the UK made up the largest proportion with 2.3 million Brits arriving in Spain. There were 3.9% more Brits than in August 2015.

France and Germany also provided a significant number of visitors with 2.2 million French and 1.3 million Germans visiting. The number of French travellers increased by 9.7% while there were 0.2% fewer German tourists than in last August.

So far this year Spain has received a massive 52.5 million international tourists, an increase of 10.1% over the same period in 2015.

Once again, the UK provides the largest proportion with 12.4 million Brits visiting so far this year. This represents an increase of 13% over the same period in the previous year.

Catalonia saw an increase of 3% over August last year. French tourists made up the largest proportion of visitors to Catalonia with 31.9% of the total. Visitors to the region from the UK accounted for 11.6%.

Visitors to the Balearic Islands increased by 4.4% to hit 2.3 million. 30.1% of those visitors came from the UK, while German visitors accounted for 29.5% of the total.

Andalusia saw 1.4 million visitors in August (as was clear when trying to park!) representing annual growth of 3.3%. Most came from the UK with 28.1% of the total, while French visitors made up 16.7%.

Reason for Visit and Length of Stay

“Leisure, recreation and holidays” was the main purpose of the visit for 9.6 million visitors in August. This represents an annual increase of 6.3%. Just under 125,000 stated “business/professional reasons” for their visit, 17.8% more than last year.

The majority of visitors (3.8 million) stayed between four and seven nights, an increase of 4.1% annually. Those staying for more than 15 nights increased by 7.7%.